The area of Panormos, was from the 18th century and continues primarily as now, the cradle of modern Greek artistic tradition, sculpture, marble sculpture but also painting and other arts.

The seaport of Panormos, the natural port of Panormos, in the NE part of Tinos (35km away from Chora) had constituted one of the two largest ports of the island as well as the transit mercantile center of Exo Meria (the load of green marble from Panormos quarries was taking place here).

The bay of Panormos is one of the most beautiful and historical points of Tinos and is a great site that has magnificent views of the uninhabited island-guard Planet located on top of one of the historical lighthouse of the Aegean. In the center of the bay, Planet islet with the deserted lighthouse “paints” the picture of the picturesque bay. From the 70’s and on, the once small fishery village began to get touristic progress, resulting today to be considered the most significant holiday settlement of the area. In the beautiful port, there are fish-taverns for the fresh fish and seafood lovers but also cafés for relaxation with view to the moored fishing boats and yachts. 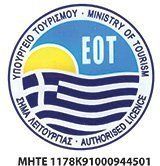